Fatness Leads to Inactivity in Kids? 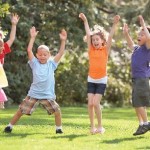 The current dogma is that our kids are getting bigger because of sedentariness and inactivity. Based on this dogma, attempts at reversing the childhood obesity epidemic focus largely on increasing physical activity -so far with little to show for.

Now, a study by Brad Metcalf and colleagues from Plymouth, UK, published online in the Archives of Disease in Childhood, suggests that it may be fatness leading to inactivity rather than the other way round.

For this study, the researchers analyse data from a prospective cohort study examining children annually from 7 to 10 years. Participants were 202 children (53% boys, 25% overweight/obese) recruited from 40 Plymouth primary schools as part of the EarlyBird study.

Importantly, the researchers used accelerometers worn by the children for 7 consecutive days at each annual time point to measure actual levels of physical activity.

Thus, while a 10% higher body fat at age 7 years predicted a relative (albeit modest) decrease in daily moderate and vigorous intensities of 4 min from age 7 to 10 years, greater physical activity at 7 years did not predict a relative decrease in body fat between 7 and 10 years.

Not surprisingly perhaps, they also note that this “reverse causality” may nicely explain why attempts to tackle childhood obesity by promoting physical activity have been largely unsuccessful.

Given, as blogged previously, that the key determinant of body fatness may well be determined by what happens in utero – the causal sequence for the childhood obesity epidemic may well be:

Thus, while interventions to increase physical activity in kids may well have an important benefits on fitness, balance, coordination and numerous other aspects of health – anyone expecting more activity in kids to reverse the childhood obesity epidemic may well be barking up the wrong tree.