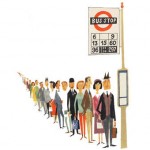 As I have blogged before, the scarce availability of access to evidence-based treatments for obesity within the public health care system is resulting in ever increasing “weighting” lists for bariatric services.

Thus, as in other cases, where the demand for medical and/or surgical interventions seriously outstrips the availability of services, the ethical dilemma of distributing these limited services in the most equitable and acceptable fashion is clearly evident.

In this context, a recent article by Govind Persad and colleagues from the Department of Bioethics at the US National Institutes of Health, published in a recent issue of The Lancet is a very worthwhile read.

As Persad and colleagues discuss, there are eight commonly used ethical principles for allocation of scarce resources, which can be divided into four categories based on their core ethical values:

3) Maximising total benefits (save the most lives, prognosis or life years)

Thus, for example, a simple lottery may result in the chance allocation of a scarce resource to someone who has only 4 months of life to gain vs. someone who may gain 40 years.

Similarly, first-come-first-served principles ignores relevant differences between individuals and tends to favour people who are wealthier, better informed, or better connected (e.g. to their referring physician).

Treating the sickest first may result in allocation of treatments to people, who have the worst prognosis and therefore the least long-term benefit.

Prioritization of people who have a high instrumental value (e.g. health care workers) or reciprocity for people who have “paid their dues” (e.g. veterans) also raises inherent ethical issues.

Thus, according to Persad and colleagues, none of these commonly used principles are fully adequate. In their paper, they propose a “complete lives system”, which incorporates five ethical principles: youngest first, prognosis, save the most lives, lottery and instrumental value.

As laid out in their paper, this system would prioritise adolescents and young adults over infants but also takes into account prognosis, in cases where the worst-off can benefit a little, but better-off people can benefit substantially more from the same intervention. It would enable more people to live complete lives whereby introducing a lottery for roughly equal recipients ensures that no individuals – irrespective of age or prognosis is fully abandoned.

Based on this concept, individuals between roughly 15 and 40 years of age, who have yet to live “complete” lives, get the most substantial level of care, whereas the youngest and oldest have a lower chance of getting that care.

For various reasons described in the paper, this system is least vulnerable to corruption and provides a disincentive for referrers to misrepresent the actual health of their patients.

Obviously, even this system is not perfect and can draw objections from some. Nevertheless, the authors argue, that this system of “complete lives” is theoretically the best framework that balances widely held values: giving priority to the worst off, maximising benefits and treating people equally.

Certainly a topic that will continue to be hotly debated as we continue wondering how to best manage an ever growing waiting list for bariatric care.