Home » blog » Obesity Down Under 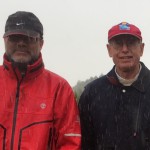 Standing in the rain with Professor Joseph Proietto, Melbourne, Australia

Following a rather relaxed August, which included meeting my new grand daughter and turning my attention to jazz guitar, I spent the last week in Australia speaking at the Australian Diabetes and Diabetes Educator conference in Adelaide and visiting colleagues at the Melbourne Baker Institute and Sydney University’s Charles Perkins Centre.

As virtually everywhere else, much government talk (and millions of dollars) focusses on prevention, while access to obesity management within the healthcare system (public or private) remains as sparse and unfunded as everywhere else.

Whilst other countries are gradually grappling with the idea that obesity, once established, must be considered a chronic disease (and thus requires the same approach to management as any other chronic disease), it appears that government and professional agencies in Australia are particularly resistant to accepting this reality.

This is especially surprising, as some of the best and strongest evidence for the chronicity of obesity and the complex biological responses that occur to defend against weight loss and virtually guarantee weight regain (including studies published in the New England Journal of Medicine and the Lancet),  come from my colleague Joe Proietto’s group Down Under.

I guess the fact that even the best science rarely translates into effective policies is not just a problem in Canada.