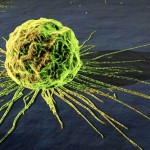 Today, at the EASD in Stockholm, the focus is on obesity.

Later today, I will be presenting an overview of the etiological assessment and management of obesity in a plenary session also featuring Eric Westman (USA), speaking on low-carbohydrate interventions, and Jim Levine (USA), speaking on non-exercise activity thermogenesis (NEAT).

I also have the privilege of chairing a poster session on adipose tissue and inflammation.

But this morning, I attended a session devoted to obesity, diabetes and cancer.

As regular readers will be well aware, obesity accounts for almost 30% of all cancers – and one of the main reasons why bariatric surgery reduces mortality is because of its profound effect on cancer-related mortality.

Regarding the potential molecular link between excess weight and cancers, Jeff Holly (UK), spoke about the important role of metabolic pathways in determining cancer risk.

As Holly pointed out, we all carry countless gene mutations that are potentially cancerogenic in many of our cells (e.g. in the skin, colon, prostate, etc.) and that the number of these cancerous cells increases dramatically with age.

Fortunately, however, we also have very effective systems that keep these cancerous cells in check, which is why most of these cancer cells never develop into clinical disease.

Nevertheless, we know that these defense mechanisms can be substantially influenced by environmental factors. Thus, for e.g. migration and adoption studies show that moving into a western lifestyle, can quickly increase the risk of cancer, not by increasing the number of gene mutations, but rather by affecting the mechanisms that normally keep these early cancerous growths in check.

Even in studies on highly penetrant cancers like breast cancers caused by BRCA mutations, the actual development of clinical cancer varies with environmental exposure.

In his talk, Holly reviewed the role of the insulin-signaling pathway, which also appears to play a key role in tumorgenesis pathways. A key molecule here is Insulin-like Growth Factor (IGF) -1, higher levels of which appear to be associated with higher risk of cancer.

IGF-1 levels can be affected by many environmental factors, which affect genes involved in metabolic pathways relevant to cancer growth.

But substrate availability may also be important. Thus, in vitro studies show that high lipid and glucose levels can both promote the growth of cancerous cells and/or reduce their sensitivity to chemotherapeutic agents.

In summary, metabolic pathways can play a key role in promoting growth of the many pre-cancerous cells – thereby increasing the risk of these cells growing into clinical cancer. This of course provides a sound rationale for the observation that lifestyle factors can have such an important role in reducing the risk of cancers.

Following this presentation, I was particularly delighted to listen to Tobias Pischon from the German Institute of Nutrtition (DIFE), Potsdam-Rehbrucke, further discussing the association between obesity and cancer. Tobias, incidentally, is a former student of mine, whose MD thesis I had the privilege of supervising, before he went off to spend time at the Harvard School of Public Health.

Pischon pointed out that the link between obesity and cancer is not just related to excess weight, but rather to the presence of abdominal obesity, which readers will know, is the kind of fat distribution that is most relevant for the metabolic complications of excess weight.

Thus, I guess if we continue to call obesity a “lifestyle” disease, I guess we can only say the same for most common cancers.