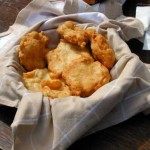 Yesterday, Ashlee-Ann Pigford, currently completing her MSc under Noreen Willows and Geoff Ball here in the University of Alberta Department of Agriculture, Food and Nutritional Sciences, presented at the Alberta Diabetes Institute’s Research in Progress seminar series on her work in First Nations children.

Ashlee spent a Summer working in the Canadian Obesity Network office, so I was particularly interested in seeing her present.

The goal of her project was to perform both a quantitative and qualitative analysis of overweight and obesity amongst First Nation children living in an on-reserve Cree community in Alberta.

The quantitative study included 105 First Nations children (Kindergarten to grade 6) and showed that almost half the children were overweight and almost one in five were obese. Around one in two had abdominal obesity, almost 65% were inactive (as assessed by pedometers) with only 36% meeting daily step recommendations.

In the qualitative study, which included having kids drawing pictures and sorting them into healthy and unhealthy piles, it became evident that the children had a strong identification with their traditional cultures and values. There was a great importance of both traditional foods and their role at cultural events as well as on hunting.

The children often cited their mothers or grandmothers as their source of health information and gained their beliefs from older relatives.

They clearly associated obesity, heart disease and diabetes to being unhealthy and considered natural foods and many sacred ceremonial practices associated with nature as healthy.

As Ashlee summarized, her findings clearly show the importance of community specific context of their health beliefs and choices, which emphasises the need for multilevel ecological approaches to tackling excess weight that need to be designed in a culturally relevant manner to promote healthy lifestyles.

It was also evident that it is crucial to involve the elders, extended family members and the parents in any meaningful initiatives to address childhood obesity in this (and probably other) First Nations community.

Congratulations Ashlee on completing your study and this most insightful presentation!