CO(a)Xing the Formation of Brown Fat 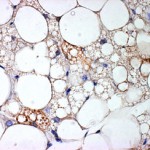 Regular readers of these pages will recall previous posts on the role of brown fat tissue and its potential role in the prevention of weight gain. This tissue, helps burn excess calories by directly converting them into heat – people with more brown fat may be less likely to become obese (click here for TV interview with me discussing this finding).

One of the prime stimulators of brown fat formation is increased sympathetic activity that is mediated through beta receptors – but how does this signal cause fat cells to become brown (incidently, the brown colour is due to the presence of large amounts of calorie-burning mitochondria in these cells).

In a paper published last week in Science, Alexandros Veglopoulos and colleagues from the German Cancer Research Center in Heidelberg, identify a key enzyme in the formation of brown fat cells.

This enzyme turns out to be COX-2 (Cyclooxygenase-2), a well-known rate-limiting enzyme in prostaglandin synthesis.

As the researchers showed in their experiments in mice, overexpression of COX-2 in white adipose tissue induced de novo formation of brown fat cells in this tissue with an increase in systemic energy expenditure.

More importantly, perhaps, this increased activity of COX-2 also protected these mice against high-fat diet-induced obesity. The body weight of these animals was 20 percent lower than that of normal animals.

Does this mean that taking pain medications which block COX-2 may lead to weight gain?

This is probably very unlikely because most adults (especially if older) have little brown adipose to start with. Furthermore, to my knowledge, weight gain does not appear to be a typical side effect of these medications.

Once again, the leap from mice to men may not be that straightforward. Rodents generally tend to have far more brown adipose tissue and I would like to see some of these studies replicated in human adipose tissue or (even better) humans.

Clearly the statement of Stephan Herzig, senior author of the paper, envisioning the removal of fat tissue from obese individuals, inducing it to produce more prostaglandins in a test tube, and then transplanting it back so that it can help burn calories, may well be a bit premature.

Nevertheless, understanding more about the biology of brown adipose tissue can certainly open the road to novel obesity treatments in the foreseeable future.