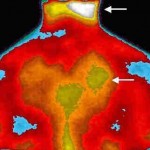 As blogged before, overweight and obese patients frequently present with fibromyalgia, characterized by chronic pain, fatigue and depressed mood.

A paper by Akiko Okifuji from the University of Utah, Salt Lake City, just published in the Journal of Pain, examines the relationship between fibromyalgia and obesity in pain, function, mood, and sleep.

Almost 50% of participants were obese and an additional 30% were overweight.

The results confirmed that obesity is a prevalent comorbidity of fibromyalgia and the authors suggest that weight management may need to be incorporated into treatments.

Clinicians should be aware of the relationship between excess weight and fibromyalgia, which can often pose an important contributor to weight gain and a major barrier to weight management.