Obesity Chomps at Your Health 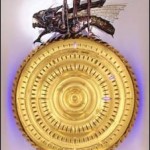 On Friday I was in Cambridge, UK, where I missed by a few minutes the public unveiling by Stephen Hawking of a strange $1.8 million mechanical clock featuring a massive time-eating grasshopper

The clock, seven years in the making by inventor and horologist John Taylor,  has no hands or digital numerals, but instead uses darting blue LED lights to indicate the correct hour, minute, and second every five minutes. (When not showing the correct time, the blue lights dart around in seemingly random patterns).

Atop the clock, a blinking, tail-wagging grasshopper (or “chronophage,” meaning “time eater”) perpetually advances the perimeter of the 4-foot-wide round dial, devouring minutes in its snapping jaws to remind viewers that time is fleeting. In the words of its inventor: “I also wanted to depict that time is a destroyer – once a minute is gone you can’t get it back.”

As I read and thought about the grasshopper chomping away at time, I could not but help think of the analogy with excess weight – every day that you carry around that excess weight it take a bite out of your health,  raising your blood pressure, straining your heart, disturbing your sleep, chewing at the cartilage of your hips and knees and increasing your risk for cancer. However, unlike time, if you intervene early enough, much of the damage is reversible or at least can be halted by losing the excess weight and keeping it off.

Easier said than done – remember, by a strange coincidence it so happens that lack of time is one of the most common “excuses” for not eating healthy and not moving enough – as the chronophage chomps away at the time you need to devote to managing your weight, your weight chomps away at your health – now there’s an idea for a clock – or should it rather be a scale?