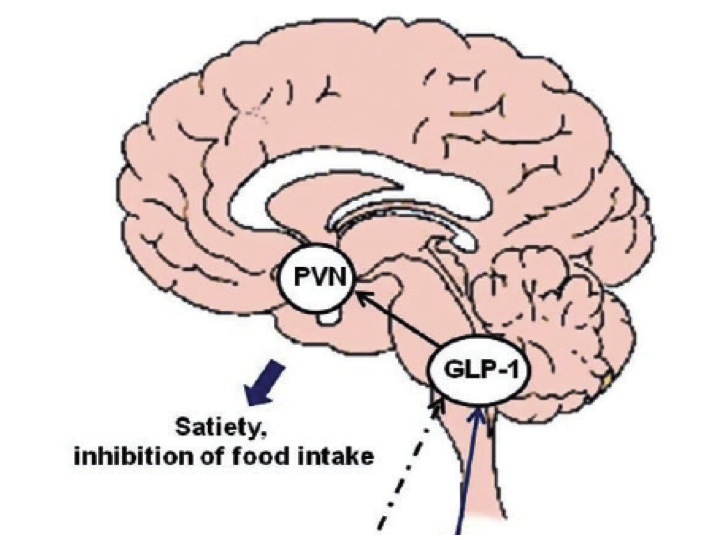 Yesterday, I discussed how part of the improvements in type 2 diabetes patients after gastric bypass surgery may be due to increased postprandial release of GLP-1.

However, it is becoming increasingly apparent that GLP-1 also exerts central effects on hunger and satiety, and perhaps even affects the desire for certain foods.

Therefore, not surprisingly, GLP-1 analogues, while already available for treating diabetes, are currently being investigated for the treatment of obesity.

This topic was recently reviewed by Torekov and colleagues from the University of Denmark, in a paper published in Obesity Reviews.

As the authors note, GLP-1 receptors are expressed in many regions of the brain and in particular in the arcuate nucleus and other hypothalamic regions involved in the regulation of food intake. Animal studies have confirmed that GLP-1’s has central effects on hunger and satiety that are independent of its peripheral effects on glucose metabolism.

However, whether peripherally injected GLP-1 actually makes it into the human brain, as suggested by some animal studies, is still a matter of debate. It is also possible that some of the effects of GLP-1 agonists on food intake may be mediated by interaction with sensory afferent neurones of the vagus nerves in the gastrointestinal tract.

Thus, it appears that GLP-1 analogues may affect feeding behaviour both through central and peripheral effects.

As a side note, it may be of interest that while the ‘hunger hormone’ ghrelin appears to counteract (or rather override) the effects of GLP-1 on satiety, the commonly used anti-diabetic drug metformin appears to increase expression of GLP-1 receptors and enhance GLP-1 secretion and sensitivity in both rodents and humans.

Currently, the long-acting GLP-1 analogues exenatide and liraglutide are being investigated as potential anti-obesity drugs, with early indications that this may indeed be worthwhile.

Thus, for example, as noted by the authors, in one study with liraglutide, obese subjects in the quartile of greatest weight loss had a mean weight loss of 18 kg with 3.0 mg of liraglutide compared with only 9 kg on placebo.

Overall, the authors conclude that:

“The recognition that several gastrointestinal hormones, released in response to nutritional stimuli are important regulators of appetite (PYY, oxyntomodulin, GLP-1 and decreased secretion of ghrelin), offers a strategy for the development of more effective ant-iobesity agents….treatment of obesity could involved a combination of hormones, e.g. GLP-1, PYY, and/or oxyntomodulin to produce a superior appetite suppressing hormone profile that may result in a weight loss far exceeding that seen in single-agent trials. Using several hormones in low doses and incorporating lifestyle interventions might maximize the clinical effect while minimizing the side effects.”

Clearly, many patients would find daily injections of hormones preferable to undergoing bariatric surgery, even if these injections would need to be continued in the long-term to keep the weight off.

Wether or not such injections would in the end also prove cost-effective will remain to be seen.

Disclosure: I am a consultant to Novo-Nordisk and involved in studies with liraglutide.