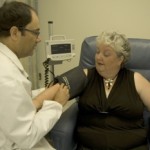 Since its launch almost a decade ago, the notion that the use of the satiogenic serotonin-norepineprhine-reuptake-inhibitor (SNRI) sibutramine commonly results in an increase in blood pressure, has been a major barrier to its use in high-risk cardiovascular patients, particularly those with high blood pressure.

This question was analysed in the 6-week run-in phase of the SCOUT study (an ongoing, double-blind, randomized, placebo-controlled outcome trial in overweight/obese patients at high risk of a cardiovascular event), published in last month’s issue of Diabetes, Obesity & Metabolism.

At entry, approximately 50% of patients were hypertensive and 26% were high-normal. In hypertensive patients, blood pressure changes decreased by median of -6.5 mmHg systolic and -2.0 mmHg diastolic (P<0.001).

Interestingly, even hypertensive patients with no weight loss or with weight gain had median decreases of -3.5 mmHg systolic and -1.5 mmHg diastolic (p < 0.001).

In contrast, normotensive patients had median increases of 1.5 mmHg systolic and 1.0 mmHg diastolic (p < 0.001), which was attenuated with increasing weight loss in that blood pressure was significantly decreased in normotensive patients, who lost >5% of their initial weight.

Approximately 43% of patients initially categorized as hypertensive had a lower blood pressure category after 6-weeks on sibutramine.

In contrast to the differential effect on blood pressure, pulse rates were uniformly elevated by 1-4 bpm across blood pressure and weight change categories.

Obviously, these results have to be interpreted with caution as there is no control group and there is some potential for regression to the mean. Nevertheless, the results do support the notion that even in high risk patients, the predominant effect of sibutramine administered together with a weight-loss program is a blood pressure decrease – especially in patients with pre-existent hypertension.

It will be of great interest to see what the net effect of sibutramine treatment on cardiovascular outcomes and safety will be, when the final results of SCOUT are revealed on completion of this major obesity outcome study.

Disclaimer: I am on the Executive Steering Committee of the SCOUT study and have received consulting and speaker honoraria as well as research support from Abbott Laboratories, the makers of sibutramine.