Home » blog » Bariatrics at the Fringe

Bariatrics at the Fringe 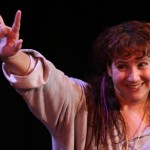 Yesterday was the start of the Edmonton International Fringe Theatre Festival, an annual event held every August in Edmonton. Established in 1982 as the first “fringe festival” in North America, on the model of the Edinburgh Festival Fringe, it has since become the largest theatre festival in North America.

This year’s line up of over 1,200 performances by 214 companies in 29 “theatres,” with an international cast of 700+ artists also offers the 500,000 visitors a performance by Amy Salloway, who writes of herself:

“I tour an autobiographical, one-woman comedy about weight, bullying, discrimination, exercise and gastric bypass surgery called “Circumference” – It’s largely based on the year I spent trying to get insurance approval for bariatric surgery in a last-ditch attempt to escape the social and societal ostracism that’s plagued me all my life.”

The official description of CIRCUMFERENCE is as follows:

Amy is FAT as hell, and she’s not gonna take it anymore! But when her radical, desperate, last-ditch plan to nab herself a socially acceptable body backfires, how will she live with the reality that remains? Can an internal and external self ever reconcile after years of bitter divorce?

Created by award-winning Minneapolis actor/writer Amy Salloway, “Circumference” jumps back and forth between memories of the junior high Presidential Physical Fitness Test and the realities of life in a weight-hating world two decades later, to present a fearlessly honest and hilarious story of size, sweat…and exercising your demons.

“..an appealing and marvelously funny performer…brave and original.” — Ottawa Citizen

I will definitely catch this show – I encourage all of the WeightWise Staff and any one else with an interest in life’s struggles with obesity to attend – look forward to the discussions.

For my non-Edmonton readers – you may want to keep an eye out for this show when it tours in your vicinity.