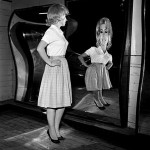 On the day 2 of the Hot Topics Conference on Obesity and Mental Health, Zul Merali and Alfonso Abizaid from the University of Ottawa (working as a tag team) discussed the importance of stress as a driver of overeating. They described a a fascinating possible role of ghrelin as an important mediator that allow organisms to meet the energetic challenges of stress (which generally does require the organism to spend more energy).

Thus, ghrelin, a hormone that increases hunger and adiposity, is not only secreted when energy stores are low, but also in response to stressors. Chronic stress leads to chronically elevated levels of this hormone in tandem with increases in appetite and weight gain. These effects are prevented by pharmacological blockade of ghrelin receptors and are absent in mice with targeted mutations to the ghrelin receptor. These ghrelin receptor deficient mice, however, are more susceptible to stress-induced depressive like behaviors. Thus, although ghrelin response to stress may induce hunger and overeating, organisms that do not (or cannot) elicit this response may be more likely to develop depression like symptoms in the face of stress.

Shelly Russell-Mayhew (U Calgary) spoke on body dissatisfaction and weight and shape concern, two components of body image that have particular relevance for obesity and mental health. Body dissatisfaction is a consistent correlate of obesity in youth. While this may well be seen as a negative consequence of obesity, it is also important to recognise that body dissatisfaction often leads to dieting/unhealthy weight control practices. In youth, dietary restraint, or the vigilant restriction of caloric intake, in turn is associated with obesity and is predictive of future weight gain. Overweight children are even more concerned about weight than their normal-weight counterparts and normal-weight children with high weight and shape concern report higher body dissatisfaction and depressive symptoms. A focus on the promotion of healthy body image for children of all weight statuses could reduce the impact of multiple negative psychological outcomes. This is particularly important because of evidence that perceived weight rather than actual weight is more predictive of psychological distress and body satisfaction predicts less weight gain over time.

Other presentations on Day 2 included talks by Nick Finer, UK, on the potential role of gut hormones for treating obesity, Teodor Grantcharov (Toronto) on surgical treatments for obesity, Valerie Taylor (Toronto) on pregnancy and the post-partum period as windows for obesity and mental illness, Michael Vallis (Halifax) on the use of motivational interviewing, Anthony Fabricatore (Pennsylvania) on predictor of weight loss response in bariatric surgery, Rohan Ganguli (Toronto) on the potential and limitations of behavioural interventions for weight loss in psychiatric patients, Fannie Dagenais (Montreal) on efforts to change social standards on weight and body image, and Mary Forhan (Hamilton) on the factors that contribute to engagement in every day life of people living with severe obesity.

Overall, a most interesting a day, that ended with a plenary engagement of the participants in drafting the Toronto Charter on Obesity and Mental Health, which will be officially released in the coming days.