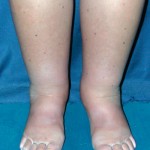 One of the most common clinical findings in patients with obesity is swelling of the lower extremities due to accumulation of fluid.

This is not only cosmetically bothersome to patients but also carries the risk of infection and skin changes.

In the vast majority of cases, this accumulation is benign and can be dealt with by simple physical measures – however, in rare cases it may be the expression of true lymphedema – a more persistent and far more difficult to treat condition.

True lymphedema can be diagnosed by lymphoscinitgraphy, which must show imparied lymphatic function.

In a letter published in the New England Journal of Medicine, Arin Greene and colleagues from Children’s Boston Hospital, describe a series of 15 obese patients presenting with bilateral lower-extremity enlargement (12 women).

All underwent lymphoscintigraphy, which revealed pathological findings consistent with lymphedema in 5 patients – the other 10 had normal results.

This strongly suggests that severe obesity is likely to be an important risk factor for lymphedema and that, as the authors discuss, there may be a threshold of BMI above which lymphatic flow becomes impaired. This could be either due to a change in lymph production (load) or lymphatic function (clearance) – the latter may result from dysfunctional lymphatics due to either local compression through fat mass or inflammation. On the other hand, increased lymph production from an expanding limb may overwhelm lymphatic capacity.

Whatever the cause, the question is whether or not this process can be reversed by weight loss – surprisingly enough the medical literature appears to be rather sparse on this issue.

I wonder if any of my readers have noted reversal of true lymphedema following significant weight loss – surgically or otherwise.