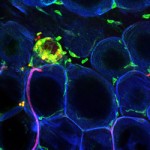 Regular readers will know that obesity is the major driver of the world-wide diabetes epidemic. But not everyone who is overweight will ultimately get diabetes.

So why do some people with excess fat become diabetic while others don’t?

Since the discovery that some people show marked signs of inflammation in their fat depots, researchers have suggested that this chronic inflammation may cause fat cells to produce molecules that promote diabetes and other metabolic complications (this has been referred to as metainflammation).

A new study by John Wentworth and colleagues from the Walter and Eliza Hall Institute of Medical Research, Victoria, Australia, published in last month’s edition of DIABETES, shows that pro-inflammatory cells found in adipose tissue may promote insulin resistance and thereby increase the risk for diabetes.

In obese women, the density of activated CD11c(+) macrophages was greater in subcutaneous than omental adipose tissue and correlated with markers of insulin resistance.

Furthermore, the researchers showed that these CD11c(+) macrophages not only metabolize lipids and may initiate immune responses but also secrete substances that impair insulin-stimulated glucose uptake by human adipocytes.

The authors conclude that these pro-inflammatory CD11c(+) macrophages in adipose tissue may serve as of insulin resistance and may explain why some people may develop diabetes in response to obesity.

Obviously, the paper does not answer the question why some people are more likely to accumulate these pro-inflammatory cells in their fat tissues. For one thing, it is clearly not simply related to the amount of fat, as some people with substantial amounts of excess fat can go their entire lives without ever developing diabetes.

On the other hand, some people appear to be particularly prone to showing signs of inflammation with weight gain and for them the difference of a few pounds of extra fat can mean the difference between having and not having diabetes.

Perhaps, one day, targeting the inflammation in adipose tissue may prove a novel way to prevent and treat diabetes associated with excess weight.