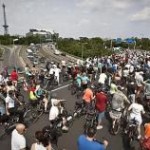 One of my favourite memories of Berlin (my home town) is the annual bicycle day, when hundreds of thousands of cyclists from all corners of Berlin converge to the centre of the city, essentially stopping all other traffic (at least for a while).

Yesterday, as I arrived in Berlin it was hard to overlook the fact that the city was firmly in the grip of bicyclists – over 200,000 of them!

Old and young, families, retirees, on all kinds of bicycles and bike-like contraptions.

Berlin is certainly one of the most bikeable cities in Europe. Indeed bicycling to university and later to work was part of my regular routine (a habit that regular readers will recall I still try to maintain in Edmonton).

I well remember riding around Berlin with two kids on my bike – one in front, one in the back – nothing to it. In fact that was pretty much standard practice. And, this was well before bike helmets (those were for racers and people who liked to show off).

In fact the lack of bike helmets in Europe is pretty standard – it’s still the rare cyclist who will bother to wear one – especially on a day like yesterday, where the city essentially belongs to bikes. Notably, a study by Dankmar Boehning and colleagues reported only 4% helmet usage amongst Berlin bycylists in 1999 – probably not much has happened since.

In any case, I wish I’d known about the bicylce day earlier. Also wish I had had a bike – I would have joined in for sure.

Maybe next time – or even better – let’s have bike only days in Edmonton! (we already have a bike month)