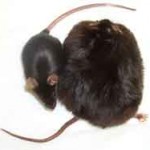 On Tuesday, the Hong Kong-based Shaw Prize foundation awarded Ontario-born Douglas Coleman, an emeritus scientist with Jackson Laboratories in Maine, and Jeffrey Friedman of Rockefeller University in New York, this year’s $1 Million prize for their work on the hormone leptin (for CBC report click here).

Coleman first identified a hormone that governs food intake and body weight while working on mice in the 1970s. From the 1990s and into this decade, Friedman, using gene mapping techniques, isolated that hormone — leptin, finding it was active only in body fat, a surprising and significant finding, given fat cells were not previously known to secrete major hormones.

The discovery of leptin was arguably the most significant stimulus for the modern biology of obesity leading not only to a renewed interest in adipocyte biology but also to a better understanding of central regulation of food intake and energy balance.

Last Fall, I had the privilege of introducing Friedman to an audience here at the University of Alberta. I have unfortunately never had the chance to meet Coleman.

Congratulations to both winners!