Obese People are Human Too 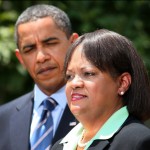 Regular readers of these postings will be quite aware of the importance and negative impact of weight bias and weight-based discrimination.

Today, I would like to reproduce verbatim yesterday’s press release by The Obesity Society regarding the criticism that surrounded the recent appointment of Dr. Regina Benjamin as the new US Surgeon General:

The Obesity Society would like to make known its response to recent criticism regarding President Obama’s nomination of Dr. Regina Benjamin, his candidate to serve as the next Surgeon General. Critics have suggested that because Dr. Benjamin is overweight, this sends the wrong message from the person who will be the public face of America’s health initiatives.

A person’s body weight provides no indication of an individual’s character, credentials, talents, leadership, or contributions to society. To suggest that Dr. Benjamin’s physical appearance discounts and discredits her qualities and accomplishments is inappropriate, unjust and wrong.

The criticism of Dr. Benjamin is an unfortunate example of the weight bias and stigmatization that is pervasive in North American society. The prevalence of weight discrimination in the United States has increased by 66% in the past decade, and is now on par with rates of racial discrimination.

Stigmatization of individuals who are struggling with their weight results in considerable suffering, impaired quality of life, and wasted potential. There is no place for weight bias in a just, compassionate society. The Obesity Society opposes weight bias and discrimination, including recent criticism of Dr. Benjamin. As the leading scientific organization on obesity, The Obesity Society is committed to increasing public awareness about weight bias and the negative consequences it can have for those affected.

I can only commend The Obesity Society on their stand on this issue.

In this regard, it may be worth noting that the Canadian Obesity Network has also identified exposing and fighting weight bias and discrimination as one of its major strategic objectives.

Obese people are human too and are certainly as deserving of respect, compassion and access to public services including adequate preventive and therapeutic health care, as individuals with other chronic health conditions. As blogged before – obesity is not a choice.