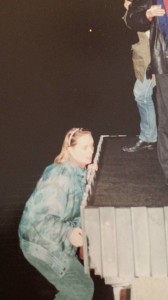 Here is how I experienced the fall of the Berlin Wall:

It was around 10 pm – we at home watching the late TV news ready for bed, when we saw the first report that about 10 minutes ago, people had begun crossing the wall from East Berlin to the West side of the city, where we lived.

I turned to Christine and said, “This I gotta see!.”

We knocked on our neighbour’s door and told them we were leaving the kids alone at home (they were 3, 5 and 7 – this was well before helicopter parenting became en vogue) and we headed out to Invaliden Strasse border crossing.

Not much was happening (yet) – a few folks, looking somewhat dazed and clearly recognisable as East Germans by their attire, were moving through the check post that seemed wide open. A few East German border police officers were standing on the East watching them go. On the West, a couple of West Berliner police cars stood parked blue lights flashing. A few British military police officers stood around shooting a video.

Then, as we parked the car and made our way towards the wall, the flood gates opened. On both sides, people were moving (like in slow motion) to witness this historic moment – masses from the East were peacefully lining up to make their way to the West. On the West people were arriving (like us) to view what was an entirely unreal moment (many West Berliners, who went to bed earlier, only learnt about the fall of the wall the next morning).

Enough said – the rest is history.

The picture is of my wife Christine climbing onto the wall – this was before the era of selfies so I don’t have a single picture of myself from that night – but enough pictures I took to remind me that I was really there.