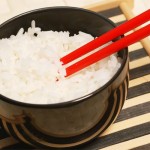 Just in time for the new year, a group of researchers from Singapore show that eating rice with chopsticks may reduce its glycemic index compared to using a spoon.

This randomised controlled trial, published in Physiology & Behaviour, involved eleven healthy volunteers, who came in on six non-consecutive days to the laboratory and evaluated three methods of eating white rice (spoon, chopsticks and fingers) once and the reference food (glucose solution) three times in a random order.

The three modes of eating were chosen to represent the most common eating habits of the various ethnic communities living in Singapore – chopsticks (Chinese), fingers (Malay and Indian) or spoon (Chinese, Malay and Indian).

Based on the glycemic response (GR) over 120 mins after ingestion of each test meal, the glycemic index of eating rice with chopsticks was 68 compared to 81 when eating the same amount of rice with a spoon was measured for the subsequent 120 min (eating with fingers fell in the middle).

The most likely explanation for this difference is the finding that the mode of eating significantly affected the number of mouthfuls, the number of chews per mouthful, the chewing time per mouthful, and the total time taken to consume the whole portion of rice.

Not surprisingly, these parameters were significantly correlated to the glycemic response.

If nothing else, this study should remind us that taking more time to eat and better chewing your food may affect the processing and metabolic response to what you eat – thus, it appears that when it comes to healthy eating – the “how” may well be as important as the “what”.