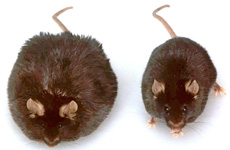 Both of these mice were obese, but the one on the right lost weight after being injected with genetic material. Photo/AP

The hypothalamus, located deep inside the brain, is a critical centre for the integration and regulation of hunger and satiety signals in humans and animals. A team of New Zealand and US researchers has now reported that transferring a gene to this part of the brain can significantly reduce body weight both in genetically and dietary-induced obese mice.

The paper by Lei Cao, published in yesterday’s issue of Nature Medicine, describes the hypothalamic injection of an adenoviral vector containing brain-derived neurotrophic factor (BDNF) coupled to a physiological responsive regulatory element. This gene transfer resulted in a 20% weight loss within 3 weeks of injection with subsequent weight maintenance over 11 months (several decades in human years).

The researchers also demonstrated that they can “rescue” these mice from the treatment, thereby theoretically increasing the safety of this approach. This may not be a bad idea, because in some experiments where the BDNF gene transfer was not coupled with a regulatory element, the animals showed bizarre behavioural changes with catastrophic weight loss.

Clearly the researchers are pleased with their results and in their paper go as far as stating that this treatment for severe obesity may become available for human treatment in the foreseeable future. Indeed, Matthew During, the senior author on the paper is co-owner of Neurologix, a biotechnological company that is currently conducting a Phase 2 neurosurgical gene treatment study in patients with severe Parkinson’s disease. This demonstrates that first human neurosurgical experiments with BDNF gene transfer may not be too far away.

While these new findings clearly point to the importance of central neuroregulation in energy homeostasis and show that this can be modified to reduce severe obesity, I find it difficult to foresee widespread use of neurosurgical treatment for a disorder as common as obesity. After all, even if this treatment was limited only to people with severe obesity, we’d still be looking at millions of people worldwide.

In the near future, I’d rather place my bets on gastrointestinal than on stereotactic neurosurgery.