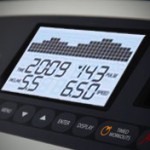 Eyeballing and “guesstimating” are the worst possible ways to determine whether or not you are eating the right amount of calories after a bout of exercise.

This, according to a study by Ruth Brown and colleagues from Toronto’s York University, published in Medicine and Science in Sports and Exercise.

The study included 58 adult men and women of either normal weight (NW) or overweight (OW), who reported either attempting (WL) or not attempting weight loss (noWL)

Following 25 mins of exercise on a treadmill at either a moderate (60% HRmax) or a vigorous intensity (75% HRmax), participants were asked to estimated the number of calories they expended through exercise and create a meal that they believed to be calorically equivalent to the amount of calories they had just burnt.

Both the moderate and intense exercise groups were on average spectacularly wrong in their estimates.

In contrast, the active weight loss (WL) groups appeared to do far better at estimating energy consumption than the non-WL groups.

As an example, following vigorous exercise, the OW-noWL overestimated energy expenditure by 72%, and overestimated the calories in their food by 37%.

Although the WL groups did better, all groups showed a wide range of over and underestimation (-280 kcal to +702 kcal).

These findings show that while most people tend to over or underestimate caloric expenditure with exercise, overweight adults who are not attempting weight loss may be even more off the mark than others.

The most obvious solution would be to use some kind of monitor that does a better job of predicting calories consumed that just guessing.

That is of course, if overcompensating is not your goal (as in people who actually gain weight when they begin exercising).

For those interested in staying in energy balance, perhaps simply stepping on the scale regularly during the week should be enough.

For those interested in losing weight, they may need to be reminded that exercise (alone) is actually a pretty inefficient way to lose weight, so the calories burnt during exercise probably don’t matter all that much for weight management (despite all other benefits of exercise – its the calories you eat or drink that count).