Meet the Canadians at OBESITY 2010 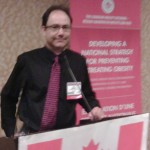 Yesterday, the Canadian Obesity Network once again hosted its traditional “Meet the Canadians” event at the 28th Annual Scientific Meeting of The Obesity Society.

As in past years, the event was well attended with over 150 attendees. I was particularly happy to see so many of CON’s students and boot campers attend. Indeed, it seemed like there were more Canadians at this event than in past years.

A notable announcement at the reception was the launch of Reality Coalition Canada, a new organisation that will advocate for better access to evidence-based obesity care for Canadians.

Clearly, the Canadian Obesity Network, with now well over 4500 members, has come a long way in creating a strong identity and visibility of Canada’s obesity researchers and clinicians, not just in Canada but around the world.