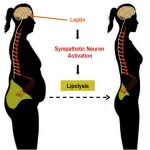 Regular readers will be well aware of leptin as a key hormone secreted by fat tissue.

Apart from its important role in appetite regulation, leptin has a number of other central and peripheral actions – one of which is to increase activity of the sympathetic nervous system.

A paper by Wenwen Zeng and colleagues published in Cell, now provides conclusive evidence that leptin can mediate fat breakdown from fat cells and does so via stimulation of the sympathetic nervous system.

Using sophisticated nerve imaging techniques, the researchers show that fat cells are often densely surrounded by sympathetic nerve endings, which, when stimulated, lead to the mobilization of stored fat and a reduction in fat mass.

Genetic ablation of these nerve endings or removal of the key enzyme involved in catecholamine synthesis completely blocks the lipolytic effect of leptin showing that the fat mobilizing effect of leptin is entirely dependent on intact sympathetic innervation and signalling in fat tissue.

Overall the finding that sympathetic nerve activity stimulates lipid release in adipose tissue is not new – but the clear demonstration that his mechanism is harnessed by leptin is.

How this finding could possibly be harnessed for obesity treatment is difficult to say – while stimulating sympathetic nerve activity may well result in lipid mobilisation, it also comes with the feared adverse effects of stimulating heart rate and increasing blood pressure, which would likely limit the clinical use of any such approach.