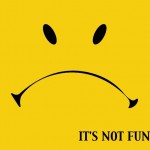 Here is a comment that a reader (Amy) posted in response to a post in which I asked if it was OK to laugh at fat jokes:

“I had an interesting thing happen on this very theme this past week. A friend of mine — a very conventionally beautiful, normative-weight young woman — has been giving herself “daily dares”, where she has to do things that are out of her comfort zone (eat a food she’s never tried, play a sport she knows nothing about, etc). Well, last week, her “dare” was to use an online photo-alteration application called “Make My Face Fat” to make herself appear obese, and post the photo on Facebook. Her justification was that “I feel really scared, uncomfortable and insecure when I know I don’t look attractive, so I thought I should see how long I could go with this picture being my Facebook photo.”

So, as you can imagine, I saw the photo of her, and thought to myself, “Why? Why is my friend making a joke out of weight gain?” I wrote to her, asking this, and that was her explanation, above. When I told her that what she was doing was humiliating and demeaning to those of us who are obese — that her stratification of “my regular face is pretty, but my FAT face would be ugly; let’s see if I can stand the ugliness!”, and that her very use of an application that reinforces “fat people” as The Other was buying into size oppression, she got furious at me. She told me that I was “taking out my anger at society” on her, and that SHE was not one of those fat-haters. She wasn’t making fun of me, she was merely expressing that gaining weight would be something difficult for her, and she was just SEEING what her face would look like if that happened. She went on and on, railing that I was targeting the wrong person, and that she was compassionate and non-judgmental…she clearly couldn’t hear my message. I couldn’t seem to convince her that ‘trying on’ a physical appearance she finds distasteful – and can step out of again whenever she wants to – objectifies that physical appearance as a joke, an aberration, a lower status…and that those of us who are trapped in that appearance for the duration of our lives have to LIVE with that objectification 24/7, and it hurts.

She hasn’t written back. I expect she’ll Unfriend me.”

This most insightful comment speaks of pain and questions why we still find fat funny.

I wonder if my readers have similar stories or insights to share on this topic.