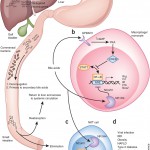 Recent interest in the role of the gut microbiome as well as the alterations in gut physiology that happens with bariatric surgery, have prompted an increasing interest in the biology of bile acids and how they relate to metabolism.

As I distinctly recall from my medical textbooks, the biology of bile acid production and disposition (let alone its many functions within the gut and in the circulation) are anything but simple.

This is why much about how bile acid physiology, especially in relationship to glucose metabolism and obesity remains unclear.

Now, a study by Rebecca Heuseler and colleagues, published in the Journal of Clinical Endocrinology and Metabolism, points to some differences in bile acid production and physiology in individuals with obesity.

In a series of studies, fluctuations in bile acid levels ere measured in 11 nonobese and 32 obese subjects; Bile acid transporter expression in liver specimens were measured in 42 individuals and in specimens of duodenum, jejunum, ileum, colon, and pancreas from 9 individuals.

Measurements were conducted after overnight fasting, during a hyperinsulinemic-euglycemic clamp, or a mixed meal tolerance test.

Markers of bile acid synthesis were twofold higher in subjects with obese subjects and inversely correlated with insulin sensitivity.

While insulin infusion (during the euglycemic clamp) acutely reduced serum bile acids in nonobese subjects, but this effect was blunted in obese subjects.

What all of this means is largely unclear but as the authors note,

“The findings reveal new pathophysiological aspects of bile acid action in obesity that may lend themselves to therapeutic targeting in metabolic disease.”

Perhaps this is a space to watch.