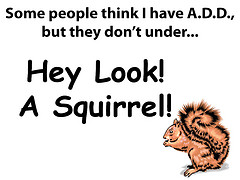 Are you an impulsive eater? Do you have a hard time meal planning or keeping a food journal? Do you find it hard to remember if you had breakfast or not (never mind what you actually ate)? Do you start every new diet or exercise program with super enthusiasm, only to lose interest a few days later? Does your day lack a routine (for no good reason)?

Now, an article by Philip Asherson and colleagues from Kings College London, UK, published in The Lancet Psychiatry discuss important conceptual issues regarding the diagnosis and management of ADHD/ADD in adults.

Although ADHD/ADD is largely thought to be a problem in kids and youth, it remains a considerable and often undiagnosed issue in adults.

Thus, as the authors point out,

“…treatment of adult ADHD in Europe and many other regions of the world is not yet common practice, and diagnostic services are often unavailable or restricted to a few specialist centres.”

This is all the more surprising (and disappointing) given that adult patients respond similarly to current drug and psychosocial interventions, with the same benefits seen in children and adolescents.

With regard to diagnosis it is important to note that,

“Symptoms of ADHD cluster together into two key dimensions of inattention and hyperactivity-impulsivity, are reliably measured, and are strong predictors of functional impairments, but they reflect continuous traits rather than a categorical disorder.”

“Of particular relevance to adult ADHD is the relative persistence of inattention and improvements in hyperactive-impulsive symptoms during development, so that many patients who had the combined type presentation of ADHD as children present with predominantly inattentive symptoms as adults.”

“In clinical practice, the continuous nature of ADHD should not present diagnostic difficulties in moderate-to-severe cases, but might cause difficulties in mild cases with more subtle forms of impairment. Careful attention is needed to assess the effect of ADHD symptoms on impairment and quality of life, including an understanding of the broader range of problems linked to ADHD (eg, executive function [self-regulation] impairments, sleep problems, irritability, and internal restlessness), in addition to functional impairments such as traffic accidents and occupational underachievement. Therefore, some individuals, who seem to function well, might nevertheless suffer from a substantial mental health problem related to ADHD.”

Key criteria according to DSM-5 include:

Other common features, that do not quite rise to level of diagnostic criteria include include poor concentration, distractibility, restlessness, over-talkativeness, sleep problems, irritability, impulsiveness, and low self-esteem.

It is important to note that other mental or physical disorders can mimic some of the symptoms of ADHD. These include anxiety, depression, bipolar disorder, hyperthyroidism and sleep apnea.

While the paper does not mention obesity or difficulties managing weight as a possible “complication” of ADHD, in my experience, identifying and treating ADHD in bariatric patients can often make all the difference.

Thus, I concur with the authors’ conclusions that,

“…ADHD should be recognised in the same way as other common adult mental health disorders, and that failure to recognise and treat ADHD is detrimental to the wellbeing of many patients seeking help for common mental health problems.”