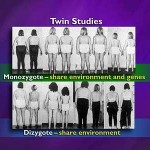 As I spend my days at the 9th Canadian Obesity Network’s Summer Bootcamp for young trainees from Canada and around the world, I was saddened to learn of the passing of Mickey Stunkard, clearly one of the biggest names in obesity research – at a healthy age of 92.

With well over 500 publications to his name, Mickey is perhaps best known for his twin studies showing that the body weight of adopted identical twins reared apart resembles each other and that of their biological parents rather than the weight of their adoptive parents.

This work helped establish the basis for much of the genetic work on obesity that followed, clearly showing that differences in body weight between two individuals are much more accounted for by their difference in genetics than by differences in their “lifestyles”.

These findings were often misused in “nature vs. nurture” debates, an issue that serious scientists have long laid to rest in light of our current understanding that the two cannot be discussed separately, simply because genes and lifestyle interact on virtually every level – from molecules, to cells, to behaviours.

Here is what one obituary had to say about Mickey:

“He surveyed obesity treatment studies in the late ’50s and found that the nation’s diet programs could claim only a 2 percent success rate. He was an early advocate for the use of bariatric surgery to induce weight loss. He also published the first modern account of binge eating in obese individuals.”

I have had to pleasure to often hear him speak at conferences.

He will be dearly remembered.