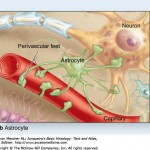 Regular readers may recall the exciting body of work from animal models of obesity showing that hypothalamic inflammation involving microscarring (gliosis) may play an important role in appetite and energy regulation in obesity.

Now, a study by Josep Puig and colleagues from the University of Girona, Spain, published in the Journal of Clinical Endocrinology and Metabolism, provides evidence for a similar process in humans.

Not only did the obese participants show greater signs of hypothalamic inflammation but these changes were also strongly associated with higher BMI, fat mass, inflammatory markers, carotid-intima media thickness, and hepatic steatosis and lower scores on cognitive tests.

While these studies do not prove cause and effect, these findings are consistent with findings in animal models and point to the role of pro-inflammatory pathways in the areas of the brain known to be intimately linked to appetite and energy regulation.

Understanding what exactly triggers this inflammatory response (in animal models, one fact appears to be a high-fat diet) and how this process could be inhibited, may open new avenues for obesity prevention and treatment.