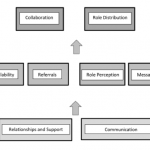 Interaction between key patterns regarding interdisciplinarity in patient weight management.

But exactly how to get these teams to function efficiently and deliver timely and ongoing obesity management remains largely understudied.

In a paper by Jodi Asselin and colleagues, published in Clinical Obesity, we explore the challenges faced by members of multidisciplinary teams working in the setting of a large primary care network.

Four common themes of importance in the ability of healthcare providers to address weight with patients within an interdisciplinary care team emerged, (i) Availability; (ii) Referrals; (iii) Role perception and (iv) Messaging.

Availability (i) refers to the ability of two or more people to meet and communicate as needed within a reasonable amount of time. This included the interdisciplinary team members knowing and meeting each other, being able to consistently communicate during the work-day, or deliberately asynchronously, and having work schedules that allowed collaboration.

Availability was often affected by scheduling that limited face-to-face time between providers and subsequently limited the potential for collaboration or discussion. Another issue was lack of in-clinic time to speak to providers who were physically present but otherwise unavailable.

Role perception (iii) concerns the way a provider’s role is understood by other interdisciplinary team members. Issues pertaining to role perception were fairly consistent and strongly linked to concerns with referrals. Common examples included concern that they were not receiving the type of referrals they could, that other providers did not understand their role in weight management, or that they as providers did not understand the role of others.

Messaging (iv) refers to the overall approach to weight management that providers within the same clinic were using, as well as the key information being shared between providers and patients. Inconsistent messaging among providers within clinics, as well as with specialists seen by the patient, was a common concern raised during interviews. In such cases there was feeling that advice was not patient-centred, that efforts had not been taken to consider patient history and that as a consequence, the patient might suffer a setback, reduced interest, or reduced personal confidence. In these cases the message a patient had received from another provider was counter to the message or approach the interviewee was giving.

However, we find that what was key to our participants was not that these issues be uniformly agreed upon by all team members, but rather that communication and clinic relationships support their continued negotiation.

Our study shows that firm clinic relationships and deliberate communication strategies are the foundation of interdisciplinary care in weight management.

Furthermore, there is a clear need for shared messaging concerning obesity and its treatment between members of interdisciplinary teams.

From the project it is evident that broad training in the various contributors to obesity enables providers to not only see their own role in treatment, but to better understand the role of others and therefore begin addressing problems in referrals, messaging and role perception.