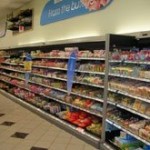 A major characteristic of our current foodscape is the wide range of foods easily available to us. For most of us, neither geography nor seasons are a significant barrier to variety.

What role does this easy access to variety in foods play in the obesity epidemic – especially in kids?

I have previously blogged on the downside of variety from an obesity perspective.

Further insights into how variety increases the risk for obesity comes from a study by Leonhard Epstein and colleagues from the University at Buffalo, Buffalo, NY, USA, published in this month’s issue of the American Journal of Clinical Nutrition.

The study deals with how variety influences habituation, or the decrease in behavioral response to a stimulus after repeated exposure over time. In the context of food, to put it very simply, habituation would lead to decreased intake of that food – almost as if the subject gets “bored” with that food and loses interest – thereby reducing caloric intake.

Previous studies have shown that variety increases food intake both in adults and children, but this study focused on whether obese kids are particularly prone to eating more and wether there is a difference in their susceptibility to a high-variety diet compared to non-obese kids.

The rather complex study did clearly reveal several important findings:

3) Distraction (e.g. tv-viewing) can delay habituation and/or speed the recovery of motivation to eat after habituation.

The bottom line is simple: variety promotes overeating particularly in obese kids, who tend to have later habituation – distraction (as in TV viewing or computer games) is bad as it leads to increased caloric intake and “resets” appetite – both together is particularly treacherous.

Given its apparent importance, it will be interesting to see how limiting variety can be harnessed to reduce caloric intake in folks trying to manage their weight – not a tasty message for the food industry, where variety reigns king.