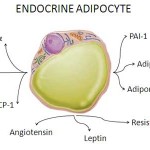 11β-hydroxysteroid dehydrogenase (11β-HSD) belong to a class of hormones that play key role in the regulation of gluco- and mineralocorticoids in a wide range of tissues.

Type 1 (11β-HSD1), highly expressed in key metabolic tissues including liver, adipose tissue, and the central nervous system, where it reduces inactive cortisone to the active ‘stress’ hormone cortisol that activates glucocorticoid receptors, and

Type 2 (11β-HSD2), highly expressed in aldosterone-selective tissues, including colon, salivary glands, and placenta, where it oxidizes active cortisol to inactive cortisone and prevents inadvertent activation of the mineralocorticoid receptor.

In a study we published back in 2004 in OBESITY RESEARCH, we examined the expression of both forms of the 11β-HSD gene in subcutaneous adipose tissue biopsies of 70 postmenopausal women. We also examined the influence of weight reduction and in vitro effects of several modulators of adipocyte gene expression on 11β-HSD genes in primary cultured human adipocytes.

As described previously, the 11β-HSD1 gene was highly expressed in human adipose tissue (whereas 11β-HSD2 was detectable at lower levels).

In contrast, 11β-HSD2 gene expression was reduced by half in obese women.

Interestingly, weight loss did not change gene expression levels of either 11β-HSD gene.

Thus, increased expression of 11β-HSD1 may well contribute to the development of insulin resistance and the metabolic syndrome commonly associated with central obesity.

Interestingly enough several pharmaceutical companies (including Merck and Boehringer Ingelheim) are currently developing selective inhibitors of 11β-HSD1 as agents to treat obesity and the metabolic syndrome.

According to Google Scholar, this paper has been cited 144 times.