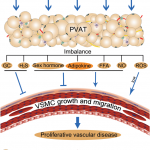 One of the hypotheses that I developed in the early 2000’s, based on the finding that adipose tissue produces a number of molecules that can directly affect vascular function, was that perivascular fat (found around virtually all blood vessels down to the tiniest arterioles) may play an important role in mediating tissue blood flow.

In a collaboration with Dr. RM Lee at McMaster, in 2006, we published a paper in Cardiovascular Research, in which we reported our finding that perivascular adipose tissue may promote vasoconstriction through the production on superoxide anion.

Inhibitors of NAD(P)H oxidase and cyclooxygenase exerted a greater inhibition on EFS-induced contraction in PVAT (+) MA than in PVAT (-) MA.

We also found that inhibitors of tyrosine kinase (tyrphostin A25) and MAPK/ERK (U 0126) attenuated EFS-induced contraction in PVAT (+) MA in a concentration-related manner, while inactive forms of these inhibitors (tyrphostin A1 and U 0124) did not inhibit the response.

Exogenous superoxide augmented the contractile response to EFS and to phenylephrine in PVAT (-) MA, and this augmentation was blunted by inhibition of tyrosine kinase and MAPK/ERK.

We also used RT-PCR to demonstrate the mRNA expression of p(67phox) subunit of NAD(P)H oxidase and immunohistochemical staining confirmed its localization in the adipocytes of PVAT.

Thus, we were able to show that PVAT enhances the arterial contractile response to perivascular nerve stimulation through the production of superoxide mediated by NAD(P)H oxidase, and that this enhancement involves activation of tyrosine kinase and MAPK/ERK pathway.

Since then, many other laboratories have explored the role of perivascular fat in the regulation of vascular function and this has become quite an area of interest for many labs around the world.

According to Google Scholar, this paper has been cited 69 times.