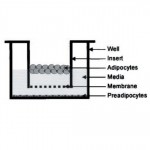 Given our interest in the renin angiotensin system (RAS) in adipose tissue, in the early 2000s, my lab back in Berlin was studying the effect of how this system affects the growth and differentiation of cultured human fat cells.

Other laboratories had suggested that angiotensin II (Ang II) plays a role in the differentiation of preadipocytes into mature adipocytes in mouse cell lines. We wanted to explore if the same was true for human cells

So we performed a series of experiments, in which we isolated preadipocytes from human adipose tissue and exposed them to angiotensinogen (AGT), Ang II, or angiotensin receptor antagonists in the differentiation medium. We found that the expression of the RAS genes AGT, renin, angiotensin-converting enzyme, and Ang II type 1 receptor increased during adipogenesis.

To our surprise, we also found that stimulation of the Ang II type 1 receptor by Ang II reduced adipose conversion, whereas blockade of this receptor markedly enhanced adipogenesis.

Assuming that the angiotensinogen formed by mature adipocytes may perhaps directly affect preadipocyte differentiation, we performed co-culture experiments, where we were able to show that mature adipocytes were indeed able to inhibit preadipocyte differentiation, an effect that was almost entirely abolished by blockade of the Ang II type 1 receptor.

In our paper, published in DIABETES, we not only interpreted these findings as indicative of a functional role of the RAS in the differentiation of human adipose tissue but also postulated that a paracrine negative-feedback loop, which inhibits further recruitment of preadipocytes by maturing adipocytes may be an important mechanisms in regulating adipose tissue growth and expansion.

These findings subsequently prompted us (and several other laboratories) to further explore the role of this system in adipose tissue, including studies in animal models and humans.

According to Google Scholar, this paper has been cited 242 times.