Hindsight: Adjustable Gastric Band in a Patient With Bulimia Nervosa 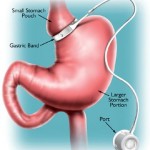 Regular readers will be well aware of the importance I place on the psychological assessment of patients considering bariatric surgery.

in 2006, we published a case report in Obesity Surgery that perfectly illustrates this point.

The patient, a 25-year-old single female, was referred to us three years after she had received and adjustable gastric band.

In the two years following this operation, she had experienced a 57-kg weight loss. When her weight stabilized at 79.5 kg, she had her gastric band tightened in the hope of promoting further weight loss, however, this level of constriction resulted in severe dysphagia.

Given that the patient had a health professional background and had to travel long-distances to the clinic, she was instructed in how to self-adjust her band. This knowledge then precipitated a problematic pattern of behavior.

It turns out that this patient had a longstanding history of bulimia nervosa (which was something her surgeon was either unaware of or ignored) and now began using the band as a tool to aid her in her bulimia.

At the time we saw her, she would alter her band almost daily, deflating it to binge and then tightening it to prevent food consumption.

The patient was severely distressed by her lack of control and ultimately contacted our clinic seeking treatment.

Following our assessment, the port was moved posteriorly so she was unable to access it and was referred to an eating disorders program for treatment of her bulimia and depression.

As we point out in our discussion,

“This case illustrates the importance of establishing guidelines pertaining to psychiatric assessment in this patient population and highlights a unique presentation of bulimia. Psychiatric illness does not exclude one from undergoing bariatric surgery, but to ensure an optimal outcome, it is important that all components contributing to the illness of obesity be identified and treated.”

As I always remind my patients, even the best bariatric surgeon is only operating on your gut and not your head.