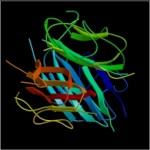 Back in 1996, a protein now widely referred to as adiponectin, was found to be secreted in large amounts by fat cells. Paradoxically, however, secretion of this protein, which has positive effects on glucose and lipid metabolism as well as anti-inflammatory effects, was found to be suppressed in obese individuals.

In 2003, we published a paper in DIABETES, in which we examined the relationship between adiponectin and mediators of inflammation in blood and subcutaneous adipose tissue samples from 65 postmenopausal healthy women.

However, we also found that the levels of adiponectin were inversely correlated with obesity-associated variables, including high-sensitive C-reactive protein (hs-CRP) and interleukin-6 (IL-6).

Thus, our data suggested a transcriptional mechanism leading to decreased adiponectin plasma levels in obese women and showed that low levels of adiponectin are associated with higher levels of hs-CRP and IL-6, two inflammatory mediators and markers of increased cardiovascular risk.

While the exact mechanism by which adiponectin secretion is reduced in obesity remains only partially understood, at the time, this study certainly suggested that low levels of adiponectin may well play a role in the increased systemic inflammation often found in obese individuals.

In the meantime, there is data to suggest that in fact the opposite may be true – increased inflammation (particularly in adipose tissue) may well be the mechanism through with adiponectin secretion is suppressed in obesity.

According to Google Scholar, this paper has been cited 344 times.