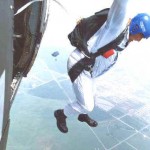 In 2003, Gordon Smith and Jill Pell from the University of Cambridge, UK, published a thought-provoking paper in the British Medical Journal, on the effectiveness of parachute use to prevent death and major trauma related to gravitational challenge.

Despite an exhaustive search of the medical literature, they were unable to identify any randomised controlled trials of parachute interventions to avoid death as a result of plummeting earthward from a great hight.

Notably, the researchers pointed out (rather harshly, perhaps) that,

“As with many interventions intended to prevent ill health, the effectiveness of parachutes has not been subjected to rigorous evaluation by using randomised controlled trials. Advocates of evidence based medicine have criticised the adoption of interventions evaluated by using only observational data. We think that everyone might benefit if the most radical protagonists of evidence based medicine organised and participated in a double blind, randomised, placebo controlled, crossover trial of the parachute.“

I remind readers of this paper in the context of two randomised controlled trials (one from the US, the other from Italy) on the effect of bariatric surgery on the resolution of type 2 diabetes recently published in the New England Journal of Medicine.

Without going into details of the trials or their findings, it suffices to point out that both studies turned out to be overwhelmingly favourable to surgery.

Even more remarkably, the Italian investigators noted no ‘remission’ of diabetes in the medical-therapy group versus 75% in the gastric-bypass group and 95% in the biliopancreatic-diversion group.

Why do I compare the results of these two studies to the use of parachutes? Because, to anyone who is even remotely aware of the outcomes of bariatric surgery in patients with type 2 diabetes, these results are neither unexpected nor earth-shattering (pardon the pun).

Thus, I am as unimpressed by the results of these two studies, as I would have been, had they compared the ‘remission’ of obstructive sleep apnea in patients on CPAP versus bariatric surgery.

Indeed, the question was never whether or not bariatric surgery can lead to short-term (or even longer-term) ‘remission’ of type 2 diabetes compared to medical treatment – the latter, is neither aimed at nor even expected to lead to remission of diabetes – conventional medical treatment merely offers to ‘manage’ diabetes, not ‘cure’ it.

That, however, is not at all the point.

No, the questions that are really of interest when it comes to surgery in patients with diabetes are very different indeed.

1) How long does the ‘remission’ last?

2) What happens to diabetes in those, where diabetes, despite surgery, does not improve?

5) How much of this improvement in diabetes is simply attributable to weight loss and how much to other mechanisms that may not require any weight loss at all?

I especially raise the last question, as it (again) turns out that neither preoperative BMI nor weight loss predicted the improvement in hyperglycemia after these procedures.

But the real question is now for health systems.

Even if surgery turns out to be the only ‘effective’ treatment and thus perhaps declared by some to be considered as the ‘first-line’ treatment for type 2 diabetes, what proportion of the world’s 300 million people living with diabetes would likely ever benefit from this treatment option? Even at 1,000,000 operations a year, it would only take about 300 years to do everyone.

Even if all bariatric surgery currently performed were limited to individuals with diabetes, current global capacity at perhaps 500,000 operations a year, addresses less than 2% of the annual global burden of this condition.

A 150% increase in availability of bariatric surgery will still leave 95% of people with diabetes untreated.

Thus, the real question for health services is to determine which 5% of people living with diabetes should be the ones to most benefit from surgery – a question left unanswered by these studies.

No doubt, for the fortunate few, surgery may provide some (temporary?) respite from diabetes.

But for those, who do not have the option of jumping off the troubled plane with a parachute, the only realistic option may be to hang on and hope for a soft landing.

Hat tip to Francis Finucane for reminding me of the parachute study.