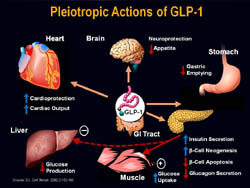 Yesterday, on my last day at the 2010 ESC meeting in Stockholm, I attended a session on incretins.

As regular readers of these pages will recall, the term incretins refers to a group of gut hormones that elicit a wide range of biological actions affecting ingestive behaviour, gut function and metabolic control.

Michaela Diamant from the University of Amsterdam, The Netherlands, talked about the importance of the incretin GLP-1 as a determinant of the attenuated insulin response to a meal seen in patients with type 2 diabetes.

There are currently two approaches to harnessing the effects of this system to better treat diabetes:

1) by blocking DPP-IV, the major degrading enzyme of GLP-1, with “gliptins”

While both approaches have been shown to significantly improve glycemic control, GLP-1 analogues are of particular interest, as they also promote clinically relevant weight loss, thereby further reducing HbA1c levels. Current GLP-1 analogues require daily injections, but longer-acting forms that can be injected at weekly intervals are under development.

Gliptins, which, although not associated with notable weight loss, are at least weight neutral, a clear advantage compared to other antidiabetic agents (with the exception of metformin).

Oliver Schnell, Munich, Germany, discussed the cardiovascular effects of GLP-1 analogues. He pointed out that fluctuations in glucose levels has been associated with increased CV mortality, something that GLP-1 analogues can perhaps help prevent.

Not only do GLP-! analogues not cause hypoglycemia, but, by virtue of their effects on delaying gastric emptying and improving insulin secretion, they may significantly blunt the glucose variability seen with conventional diabetes treatments. Thus, studies using continuous glucose monitoring show decreased fluctuations in glucose levels over the course of a 24 hour time period.

In addition, the weight loss seen with GLP-1 analogues is associated with improvements in other CV risk factors including lipids and blood pressure.

GLP-1 receptors have also been identified on vascular endothelial cells and GLP-1 infusions appear to improve endothelial function in patients with type 2 diabetes. There is also some preliminary data from animal studies to suggest that GLP-1 may improve post-ischemic ventricular function and a reduction in infarct size. A small study in patients with heart failure, GLP-1 infusion were observed to promote cardiac ejection fraction and improve physical function.

It appears that there are both GLP-1 receptor dependent and receptor independent effects of GLP 1.

Despite these putative positive effect, whether or not GLP-1 based therapies will provide cardiovascular benefits that go beyond glucose control remains to be seen.