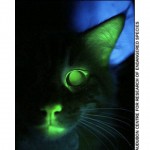 Last week, I blogged about Dr. Jeff Friedman’s talk, where he mentioned genetically modified mice, that have “glowing” adipose tissue. This novel technique allows the in vivo study of adipose tissue distribution and development.

While this is a great tool for studying adipose tissue and energy biology, the idea of genetically modifying animals by inserting or knocking out genes to better understand the roles of specific genes in biological processes is by no means limited to the field of obesity research.

Sometimes the results can be creepy as in the “glow-in-the-dark” cat I recently found mentioned on my favorite high-tech blog MedGadget, which reported on Mr. Green Genes, the cat that was genetically engineered at the Audubon Centre for Research of Endangered Species in New Orleans to carry the green flourescent protein (GFP), the discovery of which won this year’s Nobel Prize for Chemisty.

Readers who are freaked out by the “misuse” of animals for science, may find solace in another entry in MedGadget: a “virtual rat” for pre-laboratory studies of drug response developed by Simcyp, a UK company specializing in pharmacokinetic modeling. The idea of course is to reduce the amount of rat testing during the development of new drugs.

Although the model used in the Simcyp Rat module is based on the male Sprague-Dawley, the flexible platform allows the user to ‘build their own rat’ by changing parameters within the library.

As excess fat affects drug response in both rats and people, I wonder if there is a “virtual fat rat” that can be used to study bariatric pharmacology.