Global Obesity Is Not About To Get Better Any Time Soon 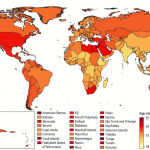 There are now more overweight than underweight people in the world today and there is little hope that there will be any noticeable reduction in this trend till 2025.

That essentially is the key message from a “landmark” paper with data from almost 20 million people (and a similar number of authors) from around the world published in The Lancet.

The researchers looked at data from 1698 population-based data sources from 200 countries for obesity prevalence data between 1975 and 2014.

The paper has wonderful maps and graphics that I am sure will find their way into many presentations on obesity (including mine) to demonstrate both the magnitude and ubiquity of the problem (not to say that underweight still remains a substantial problem in many parts of the world with problems at both ends of the weight spectrum often co-existing within the same countries).

Most alarmingly, as the authors point out, is the trend for severe obesity which will soon affect as many as 6-9% of the population in some high- and middle-income countries.

According to the authors,

“Even anti-hypertensive drugs, statins, and glucose-lowering drugs will not be able to fully address the hazards of such high BMI levels, and bariatric surgery might be the most effective intervention for weight loss and disease prevention and remission.”

Now may may well be true but it is also highly unrealistic.

At the rates that bariatric surgery is currently accessible in most countries, it will only take a 100 years (or more) to treat everyone who already meets the criteria today.

What we really need are better medical treatments that are effective, safe and scaleable (in the same manner that we have scaled the use of anti-hypertensive drugs, statins and glucose-lowering drugs to address hypertension, dyslipidemia or diabetes, respectively).

Better obesity treatments will be desperately needed while we wait for population interventions to hopefully begin reducing obesity rates by 2025.