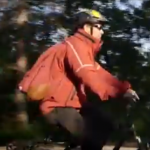 Regular readers will be familiar with the fact that not all people with excess weight necessarily have health problems. Now, the 3SAT television channel, which broadcasts in Germany, Austria and Switzerland has produced a 45 minute documentary on the science behind these findings.

Although the film is in German, I thought I would post the link anyway as many of my readers may well be able to grasp the story even if they are not entirely fluent.

Incidentally, I am featured about 2.5 minutes into the film, discussing the Edmonton Obesity Staging System and related issues.