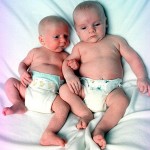 Readers of these pages are by now quite familiar with the increasing evidence showing that what happens to the fetus in utero may be a key determinant of obesity risk later in life. Thus, both small-for-gestational-age and large-for-gestational-age babies appear at increased risk for becoming obese kids (and adults).

One of the important determinants of infant weight is the magnitude of maternal weight gain in pregnancy. But how strong is this relationship really?

This question was now examined by David Ludwig (Harvard) and Janet Currie (Columbia) in a paper published last month in The Lancet.

Women who gained more than 24 kg during pregnancy were more than twice as likely to give birth to an infant weighing more than 4000 g than women who only gained 8-10 kg.

In light of the increasing evidence that larger infants are much more likely to become overweight and obese children (and later adults), this study certainly supports the need for efforts to prevent excessive weight gain during pregnancy.

Targeting obesity prevention and treatment strategies to younger women and limiting excessive weight gain during pregnancy, may well be the single most effective way to prevent obesity in future generations.