Even a Modest Lack of Sleep Can Adversely Affect Metabolism 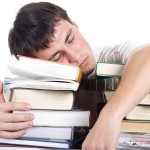 Kevin is a healthy 24 year old student with a BMI of 25, who usually sleeps almost 8 hrs (7:45 to be precise). He is usually fast asleep within 20 mins of lying down and has good quality sleep.

Having always had some interest in research, Kevin (together with 18 other healthy young male students) volunteers to take part in a study on sleep restriction at the University of Surrey, UK, conducted by Denise Robertson and colleagues, the results of which are now published in METABOLISM.

Before beginning the study, the researchers measured Kevin’s body composition (he had 16% body fat), his blood pressure (normal), glucose and insulin levels (normal), adiponectin, leptin and even performed a euglycemic insulin clamp to measure his insulin sensitivity.

As a result of randomization, Kevin ended up in the sleep restriction group and now had to set his daily alarm clock for 1.5 hours before his normal waking time for the next three weeks. He was also told not to nap during the day. Close activity monitoring ensured that he did not cheat on the protocol.

During the first two weeks of sleeping less, Kevin’s body weight actually decreased by about 4 lbs, only to increase slightly above baseline at the end of the study. Similarly, he became more insulin resistant after one week of sleep deprivation, but this returned to normal at the end of three weeks .

Although not much happened to Kevin’s leptin levels during the first two weeks, they fell sharply in week three and were significantly lower than at baseline by the end of the study. (Not much happened with Kevin’s adiponectin levels.)

While Kevin and his colleagues in the sleep deprivation group were experiencing these hormonal changes, not much was happening to the students randomizes to the habitual sleep control group.

As the authors note, the metabolic response to mild sleep deprivation appears to be variable over time with some early changes that may not be sustained over time.

However, they also note that effects of lowered levels of leptin (seen in the third weed) on hypothalamic centres regulating appetite, could potentially lead to increased food intake and weight gain.

This, would need to be looked at in studies with longer duration. Also, what happened to young healthy Kevin, may not be typical for older subjects, women, or those with excess weight or diabetes.

Nevertheless, the study does show that even short term mild sleep deprivation can affect metabolism, even in healthy young men, possibly in a direction that would be conducive to long-term weight gain.

Hopefully, Kevin has by now caught up on his sleep and is not out partying too hard with his buddies.