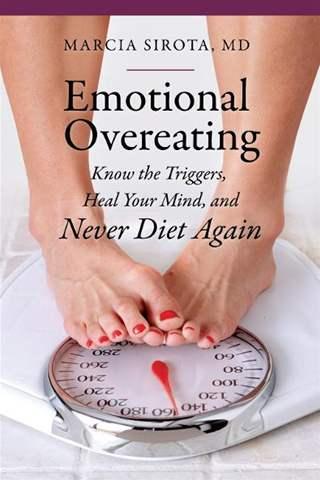 Over the past few days I have shared some of my thoughts on how a “healthy” diet must not only ensure appropriate nutritional and caloric balance but must also foster emotional balance (reasonably skewed to the positive side).

Thinking about this issue, yesterday, I finally got around to picking up the copy of a book on emotional eating that was sent to me several months ago (disclaimer!) by Marcia Sirota, a Toronto-based psychiatrist, who specializes in the treatment of trauma and addictions.

The book with the title, “Emotional Overeating: Know the Triggers, Heal Your Mind, and Never Diet Again“, focusses on the many emotional reasons that drive us to diet and overeat.

To Sirota, dieting and compulsive overeating are simply two sides of the same coin, both rooted in the need to deal with childhood hurts, losses and unmet needs as well as adult suffering, whether conscious or unconscious.

“People think that they don’t have an eating disorder if their weight is normal for their age and body type, but it’s not your size that’s indicative of the problem; it’s the degree to which you think obsessively and behave compulsively with regard to food and your weight. Until you’ve let go of the obsessive thinking and compulsive behaviors associated with disordered eating, you’ll never be happy or free.”

“No matter what your size is, if you can’t stop thinking about eating and weight and can’t stop compulsively indulging or restricting, then you’re unhappily locked in the prison of food addiction.”

The severity of the problem depends on

But perhaps, I should allow Sirota to speak for herself in these introductory posts on her blog:

Emotional Overeating Part 1: The Most Overlooked Reason for Why We Overeat

Emotional Overeating Part 2: How to Tell if You’re Doing it

Emotional Overeating Part 3: Be Aware of How You Eat

While clearly, not everyone with excess weight has a story of childhood or adult trauma or loss, I have no doubt that many (not just those, who experience some degree of emotional eating – and who doesn’t?), will benefit from reflections on the emotional aspects of weight and food obsession.

I am still only half way through, so I cannot provide a final opinion on the book and the solution it may provide.

However, I am always happy to see a book on obesity and weight management that does not include recipes or exercise tips – by that standard alone, I would happily recommend this book to anyone interested in a deeper and meaningful analysis of what drives obesity and what doesn’t.