Electronic Versus Pen And Paper Monitoring Of Food Intake 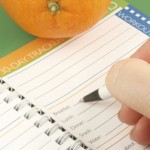 Self-monitoring is one of the few proven strategies for long-term weight management (which is why all programs worth their weight use it).

But does it really matter how you self-monitor and are electronic forms more accurate than simply using pen and paper?

This issue was examined by Melinda Hutchesson and colleagues from the University of South Wales, Australia, in a paper published in the Journal of the Academy of Nutrition and Dietetics.

All three methods revealed roughly the same amount of daily caloric intake, falling short by about 500 kcal of the actual measured expenditure.

Nevertheless, around 90% of the participants preferred an electronic method to the paper based method.

Thus, the author argue that,

“Because online food records completed on either computer or smartphone were as accurate as paper-based records but more acceptable to young women, they should be considered when self-monitoring of intake is recommended to young women.”

As far as I am concerned, you can use whatever method you want as long as you use some form of self-monitoring. After all, it is the act of self-monitoring that counts – as with diets, this only works when you actually do it.

Hutchesson MJ, Rollo ME, Callister R, & Collins CE (2014). Self-Monitoring of Dietary Intake by Young Women: Online Food Records Completed on Computer or Smartphone Are as Accurate as Paper-Based Food Records but More Acceptable. Journal of the Academy of Nutrition and Dietetics PMID: 25262244