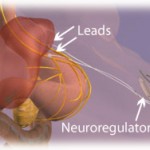 Regular readers may recall past posts on the use of intermittent electrical blockade of the vagus nerves (VBLOC) as a means of reducing food intake to promote weight loss.

Now a large randomised controlled study of vagal blocakade, published by Sayeed Ikramuddin and colleagues, published in JAMA, reports on rather disappointing outcomes with this treatment.

In this study (ReCharge), conducted  at one of 10 sites in the United States and Australia between May and December 2011, 239 participants with a BMI greater than 40 (or greater than 35 with at least one comorbidity), were randomised to receiving an active vagal nerve block device (EnteroMedics’ Maestro® Rechargeable (RC) System, n=162) or a sham device (n=77).

Over the 12-month blinded portion of the 5-year study (completed in January 2013), the vagal nerve block group lost about 9% or their initial body weight compared to only 6% in the sham group.

In addition to this rather modest difference in weight loss between the groups (about 3%), participants in the active treatment group also experienced a number of clinically relevant adverse effects (heartburn or dyspepsia and abdominal pain).

Thus, overall these rather disappointing results are in line with the previously disappointing observations in the smaller MAESTRO trial.

Based on these findings, it seems that intermittent electrical blockade of the vagal nerve may not hold its promise of a safe and effective long-term treatment for severe obesity after all.