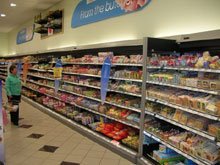 One of the most popular recommendations to anyone trying to control their caloric intake is to not eat when you are starving – this is the worst time to eat, as your food choices are likely to be calorie-dense and tachyphagia (eating too fast) is likely to overwhelm any chances of your satiation response stopping you before you eat too much.

The same apparently applies to shopping, especially if you shop in the evenings just before supper – a time, when most people (especially those who don’t eat much during the day) are famished.

In a first study, conducted in the laboratory, participants (age range, 18-62 years; 71% were female) were asked to avoid eating for 5 hours prior to the study after which, they were eater fed of remained hungry prior to shopping on a simulated online grocery store that offered a mix of lower-calorie foods (fruits, vegetables, chicken breasts) and higher-calorie (candy, salty snacks, red meat) foods with each high-calorie item paralleled by a lower-calorie alternative.

In a a follow-up field study, the researchers tracked people’s purchases in an actual grocery store at different times of the day  when an earlier study had indicated they were most likely to be full (1:00-4:00 PM) or hungry (4:00-7:00 PM).

Surprisingly (or perhaps as expected), hungry participants bought a significantly larger amount of higher-calorie foods and fewer healthier low-caloric items. This was also true for the real-life shoppers, who shopped in between 4.00 and 7.00 PM (i.e. before supper).

Although hungry shoppers bought more calories, they did not buy more food items, suggesting that it is really the calories they are interested in rather than the actual amount of food.

The learning from this finding are clear to the researchers,

“It suggests that people should be more careful about their choices when food-deprived and possibly avoid choice situations when hungry by making choices while in less hungry states (eg, by eating an appetizer [sic] before shopping).”

Or in other words, stop by the hot-dog stand on your way into the grocery store – not on your way out.