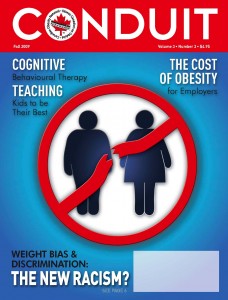 The Canadian Obesity Network’s new supportive logo, tagline (respect.knowledge.action) and strategic objective (to remove the stigma from obesity and bring positivity and respect to those who are affected by it) is based on the accumulating evidence that weight bias and discrimination have significant detrimental physical, emotional and social consequences for Canadians living with obesity.

Now a paper by Angelina Sutin and colleagues, published in Psychological Science shows a positive association between weight discrimination and the risk of all-cause mortality.

The researchers studied almost 20,000 Participants in the Health and Retirement Study (HRS) and the Midlife in the United States Study (MIDUS).

In both studies, perceived weight discrimination was associated with an almost 60% increase in mortality risk.

Thus, although such studies cannot prove causality, they do suggest that experiencing weight-based discrimination may not only have negative physical, emotional and social consequences for people living with obesity, but may also shorten life.