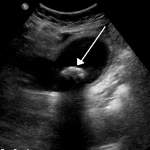 Any form of rapid weight loss is well known to promote the formation of gall stones. Thus, given the rapid rate of weight loss post bariatric surgery, patients are at particularly high risk of developing gall stones (and related complications).

Now, a study by Lindsay Adams and colleagues, published in Obesity Surgery reports on a trial that examined whether or not administration of ursodeoxycholic acid (UDCA) could reduce the incidence of galls stones following sleeve gastrectomy.

75 eligible patients (57 of who completed the study) were randomized to receiving 300 mg UDCA twice daily for 6 months post-surgery or no treatment. Gallbladder ultrasounds were performed preoperatively and at 6 and 12 months postoperatively.

At 6 months, 2 of the 19 treated patients who had ultrasounds had gall stones compared to 10 of 25 patients in the control group.

However, at 12 months (6 months after discontinuation of therapy), 2 of 22 treated patients had galls stones compared to 3 out of 14 in the control group.

Of the 17 patients who developed gallstones, 7 patients underwent cholecystectomy.

Overall, the authors note that the incidence of gallstones with about 30% was as high as has been reported for patients with gastric bypass surgery.

Clearly this study (as acknowledged by the authors) has important limitations due to the considerable number of participants that were lost to follow-up.

Nevertheless, for what it’s worth, the study certainly suggests that USCA treatment can markedly reduced the incidence of sludge and gallstones at 6 months in patients undergoing sleeve gastrectomy.

As to whether or not this would justify the routine use of USCA in all patients following bariatric surgery is certainly debatable.