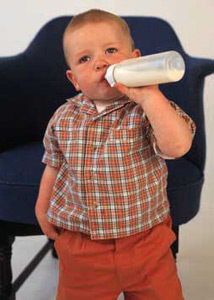 Yesterday, the media were awash with reports on a new study out from Temple University, Phildadephia, regarding the strong association between bottle feeding beyond the age of two and the prevalence of childhood obesity at age 5 1/2.

In this paper, published in the Journal of Pediatrics, Rachel Gooze and colleagues examined data on 6,750 kids born in 2001 from the Early Childhood Longitudinal Study, Birch Cohort.

Surprisingly, more than one in five kids over the age of two were still using the bottle as their primary drink container and/or were being put to bed with the bottle.

In an interview with Anne-Marie Tobin from the Canadian Press, I offered the following comments:

“Thus, as discussed in the study, if a 24-month-old girl of average weight and length who is put to bed with a 250-millilitre (eight-ounce) bottle of whole milk, receives approximately 12 per cent of her daily caloric needs from the bottle, this might be fine if the child is eating 88 per cent less calories in regular meals throughout the day”

“But what happens in reality is the kid will eat 100 per cent of the calories it needs, and then you’re adding another 12 per cent at night because you’re giving her the bottle to put her to sleep.”

I also noted that:

“When kids are at this crucial stage of development, issues of satiety, appetite, hunger and a reward system are being hard-wired into a child’s brain, and they’re very hard to undo.”

“A child who is breastfeeding is in control and drinks until he’s full, whereas control is with the parent when a child is bottle-fed. Even if the child is satisfied and pushes the bottle away, a caregiver might continue insisting that it be finished.”

Importantly, however, I also noted that a longitudinal study, although revealing findings that are highly plausible, should not be taken to prove causality.

Nevertheless, given the strong biological rationale based on what we know on neurodevelopmental aspects of ingestive behaviour, I would not be surprised if similar associations are found in other birth cohorts and that future intervention studies (although hard to do) may well prove that denying kids the bottle after age two may reduce the risk of future obesity.

There will never be one thing that fully explains obesity in everyone – not unlike genetic risk, each single factor can be a small piece of the puzzle – impacting some folks more than others.

The more we understand this, the better (some would say the only) chance do we have to deal with this issue.