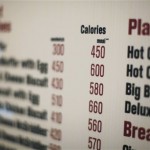 One of the most common misconceptions in the simplistic “eat less – move more” narrative, is equating the calories in a food with the amount of work that would be needed to burn those calories (e.g. X potato chips equal y minutes of riding your bike).

Not only are things rarely that simple (given that individual “fuel efficiency” varies widely based on size, age, conditioning, fitness, and probably countless other variables), but these messages just serve to reinforce the notion that exercise (or for that matter any form of physical activity) is indeed a viable strategy to “burn off” excess calories.

For what it’s worth, a study by Viera and Antonelli from the University of North Carolina, published in Pediatrics, shows that physical activity calorie equivalent labeling (PACE) has no more impact on parents’ fast food decisions than showing calories only.

The study was conducted as a national survey of 1000 parents randomized to 1 of 4 fast food menus: no labels, calories only, calories plus minutes, or calories plus miles needed to walk to burn the calories.

After excluding implausible answers, the researchers were left with 823 parents, with the mean age of the child for whom the meal was “ordered” being about 9.5 years.

Despite this lack of difference, when parents were asked to rate the likelihood each label would influence them to encourage their child to exercise, 20% of parents reported that calories-only labeling would be “very likely” to prompt them to encourage their children to exercise versus 38% for calories plus minutes and 37% for calories plus miles.

From these findings the authors rather enthusiastically conclude that PACE labeling may influence parents’ decisions on what fast food items to order for their children and encourage them to get their children to exercise.

Both of these conclusions are rather optimistic at best.

As for influencing the parents choice, there was clearly no difference between wether or not calories were shown alone or equated to time or miles – calories alone did the job.

And as for whether equating calories to activity would do anything at all in terms of parents actually getting their kids to do more, I would remain rather sceptical till I actually see a study that reliably measures physical activity.

Overall, this study does nothing to alleviate my concerns about equating food calories to calories burnt – this is a narrative that both the food and the fitness industry often favours in their marketing – the former to suggest that with enough physical activity, you can eat as many calories as you want; the latter to suggest that exercising is the best way to lose weight.

I for one would be perfectly happy to just see calories on menus.